There is a time in Eastern Ontario during early spring when  the temperature oscillates
day and night between being above 0 degrees during the day and below freezing  at night.

It is the time when there is usually still snow on the ground, no pesky bugs and the sun rays
bouncing off the snow is bright enough to send local residents scurrying to the retail stores
to buy sun glasses to protect their eyes from the glaring sun.

February 20, 2017 - The long range weather forecasts indicate that the Maple Sap
should be running well this year in Eastern Ontario with days starting about
Febryrt 23, 2017 when the daytime temperatures will be above 0 degrees C and
the night time temperatures below 0 C.

Harvesting maple sap over the next 30 days looks favourable for maple syrup producers because of the predicted temperatures especially when night time temperatures are exceeding freezing....

It is also the time when maple sap starts to flow from the trees to wood fired evaporators
changing almost transparent sap into the golden sweet maple syrup which is Eastern Ontario's
first crop of every year.  Sap collection and subsequent boiling has happened a long time
since the first settlers located here some 300 years ago.

In Ontario, it is produced under Regulation 119 Ontario Maple Syrup Regulations

tdc's FarmGate went out with the 1st Sydenham Ontario's Beaver Troop and their
family and friends to "Maple Madness"  at the Little Cataraqui Creek Conservation Area
in Kingston Ontario Canada to find out what making maple syrup is all about.

We offer this photo essay to help the world understand why people who live in this area
feel passionately that maple syrup production is part of their heritage. 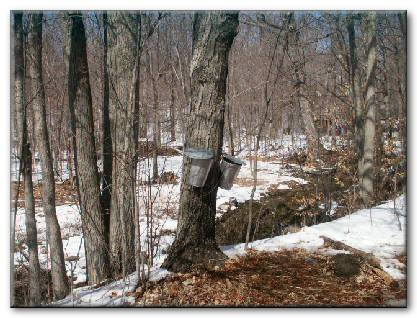 Maple trees being tapped as they were 20 years ago.
They seem a lot more photogenic than the blue sap lines of today

e-Mail this Page to a Friend