There are a lot more ways in which rice can be used in the preparation of your Sunday dinner than potatoes.

Try substituting rice for your potato entree or providing both.  And see which one your family and friends choose.

Here are some of the best ways to Cook  Rice.

Many people shy away from rice due to a fear of cooking it. (Hence the popularity of instant rice, which offers "perfect" rice—in exchange for flavor and texture.) While exactly how rice cooks changes from variety to variety, even from batch to batch (brown rice cooks longer than white, for example; old rice absorbs more water than new) getting consistently good results is not impossible. In fact, the method that works best is practically the same as the one on the back of the box.

Place the rice cooker with rice and water in the centre of the microwave now.
Set the time. This can vary for different microwaves with different power.
Below are the times rice takes to cook in a 700 watt microwave

When done fluff up the rice and serve. 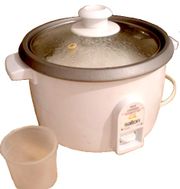 The preparation of rice has traditionally been a cooking process which requires attention to ensure the rice is cooked properly. Rice cookers simplify the process by automatically controlling the heat and timing, while at the same time freeing up a heating element on the range. Although the rice cooker does not necessarily speed up the cooking process, the cook's involvement in cooking rice with a rice cooker is reduced to simply using the correct amount of water. Once the rice cooker is set to cook, the rice will be cooked with no further attention.

Typically, a rice cooker contains an insulated outer container containing a heating element, into which is fitted an inner removable bowl, which is sometimes non-stick or teflon-coated, which often has graduations marked in cups of rice (white). Whereas less expensive and older models use simple electronics and mechanical and thermal sensors, high-end rice cookers use microprocessors to control the cooking process and often incorporate a timer which can be used to set the desired "ready time". Many rice cookers can keep rice warm safely for up to 24 hours. This helps to avoid the dangers of food poisoning due to Bacillus cereus. New rice cookers normally include a small measuring cup, and a plastic paddle for serving the cooked rice. The rice cup measure is normally 180 ml, approximately 25% smaller than the western measuring cup of 8 (US) fluid ounces / 250 ml.

Different kinds of rice require different amounts of water. Usually, there are graduated marks for the right amount of water only for white rice, but sometimes there are separate scales for brown rice (as more water is required) or for cooking other food in the appliance.

Once the lid is closed and the cooking cycle has been activated, the rice cooker does the rest. Higher-end models give a countdown in minutes to the "ready time," or beep when done. Many people prefer to let the rice soak for a while before cooking the rice; additionally, some like to allow the rice to "rest" for a while after cooking before eating the rice. Higher-end models automatically time the soaking and resting periods.

In a large skillet over medium heat, cook bacon until evenly brown
Chop bacon, and set aside, reserving the bacon fat
Put onion in skillet, and saute until tender
Stir in rice, and cook until lightly browned, 3 to 5 minutes

Meanwhile...
In a small saucepan over medium heat, combine chicken broth and tomato sauce and bring to a boil
Then pour in boiling chicken broth and tomato sauce into skillet
Add the diced tomatoes, green peppers, and chopped bacon stir well to combine
Season with chili powder, salt, and pepper
Cover, and simmer for 30 to 40 minutes
Stir in corn and heat 15 minutes longer
Serve

1 In a medium heavy bottomed saucepan, combine milk, rice and salt and bring to a boil over high heat. Reduce heat to low and simmer until the rice is tender, about 20 minutes. Stir frequently to prevent the rice from sticking to the bottom of the pan.

2 In a small mixing bowl, whisk together egg and brown sugar until well mixed. Add a half cup of the rice mixture - a tablespoon at a time - beating to incorporate.

3 Add egg mixture back into the saucepan of rice and milk and stir, on low heat, for 10 minutes or so, until thickened. Be careful not to have the mixture come to a boil at this point. Stir in the vanilla. Remove from heat and stir in the raisins and cinnamon.

Beat the eggs lightly with chopsticks, add a dash of salt (Add a bit of oyster sauce if desired).

Chop the chicken meat and dice the onion and green onion.
Heat wok and add oil.

When oil is ready, pour 1/2 of the egg mixture into the wok and cook over medium heat, turning over once. Cook the other half the same way. Cut the egg into thin strips, and save for later.

Stir-fry the onion on high heat for a few moments, remove and set aside. Do the same for the green peas.

Add oil, turn down the heat to medium and stir-fry the rice. Add the soy sauce, salt, pepper and oyster sauce. Add the chicken, onion and green peas and combine thoroughly. Serve chicken fried rice with the strips of egg on top and the green onion as a garnish. (Alternately, you can mix the green onion and egg in with the other ingredients).

Congee, served with crullers for dipping, is a classic Chinese breakfast dish. This is basic recipe for congee that you can add to as desired. There are no rules about what to add: meat, fish, vegetables, and healthy herbs, shredded lotus root and gingko nuts are all popular. You can also make a sweet version of congee with Chinese dates (jujubes) and a bit of rock sugar. Add the secondary ingredients after bringing the rice to a boil, before turning down the heat. Serves 6 to 8

In a large pot, bring the water and rice to a boil.
When the rice is boiling, turn the heat down to medium low.
Place the lid on the pot, tilting it to allow steam to escape (the same as you would do when making cooked rice.
Cook on medium low to low heat, stirring occasionally, until the rice has the thick, creamy texture of porridge (1 - 1 1/4 hours).

Add the salt, taste and add seasonings if desired. Serve with garnishes such as crushed peanuts if desired.

Regular Long Grain White Rice
One of the most popular types of rice because it has a subtle flavour which perfectly complements both rich and delicate sauces. Milled to remove the husk and bran layer, the grain is slim and 4-5 times as long as it is wide. On cooking the grains separate to give an attractive fluffy effect. Extremely versatile and is used for countless international savory dishes. It is also an essential in Chinese Cooking.

Easy-Cook Long Grain White Rice (Parboiled /Converted /Pre-fluffed)
This variety has a slightly fuller flavor. Unlike regular white rice which is milled direct from the field, it is steamed under pressure before milling. This process hardens the grain, reducing the possibility of over-cooking. It also helps to retain much of the natural vitamin and mineral content present in the milled layers. When raw the rice has a golden color, but turns white upon cooking. Can be used in the same dishes as regular long grain, but is particularly good for rice salads.

Indian Basmati Rice.
Indian Basmati rice is also an aromatic rice, but has a very different aroma and taste from Thai Jasmine. Some people describe its aroma as popcorn like. This rice is grown in the northern Punjab region of India and Pakistan, and commands the highest price of any variety of rice grown in the world. (not counting artificially high prices for rice in Japan.) This rice has a high amylose content and a firm almost dry texture when properly cooked. The raw kernel is long and slender like southern long grain, but slightly smaller. The kernels increase in length by more than three times when cooked to produce a very long slender cooked grain. The best Indian Basmati has been aged for at least one year to increase firmness of cooked texture and increase the elongation achieved in cooking. Once again, there are many "knock off" varieties grown in the U.S., but none match authentic Indian Basmati for favor, aroma, texture, and appearance

Brown Rice
Kernels of rice from which only the hull has been removed. Brown rice may be eaten as is or milled into white rice. Cooked brown rice has a slightly chewy texture and a nut-like flavor. The light brown color of brown rice is caused by the presence of bran layers which are rich in minerals and vitamins, especially the B-complex group.

Wild Rice
Wild rice is a nutritional grain that serves as a substitute for potatoes or rice, and is used in a wide variety of foods such as dressings, casseroles, soups, salads, and desserts. In recent years, wild rice has been used in breakfast cereals, and mixes for pancakes, muffins, and cookies. Blends of wild rice and long-grain regular rice (Oryza) that were introduced in the early 1960s increased the popularity of wild rice among consumers. Wild rice from natural stands is popular among health-food enthusiasts.

This grain has a high protein and carbohydrate content, and is very low in fat (Table 1). The nutritional quality of wild rice appears to equal or surpass that of other cereals. Lysine and methionine comprise a higher percentage of the amino acids in the protein than in most other cereals. The SLTM value (sum of lysine, threonine, and methionine contents) often serve as a measure of the nutritional quality of cereals, and is a little higher for wild rice than for oat groats, which is one of the better cereals for humans. Amino acid composition of processed and unprocessed wild rice is similar, which indicates little reduction in nutritional quality during processing. Wild rice contains less than one percent fat, of w which linolenic and linoleic acids together comprise a larger proportion of the fatty acids (68%) than in wheat, rice, or oats. Although these two fatty acids are easily oxidized and make wild rice prone to develop rancid odors, the high levels of linolenic acid make the fat in wild rice highly nutritious.

Mineral content of wild rice, which is high in potassium and phosphorus, compares favorably with wheat (Table 1), oats, and corn. Processed wild rice contains no vitamin A, but serves as an excellent source of the B vitamins: thiamine, riboflavin, and niacin.

Back to Sunday Dinner Selections